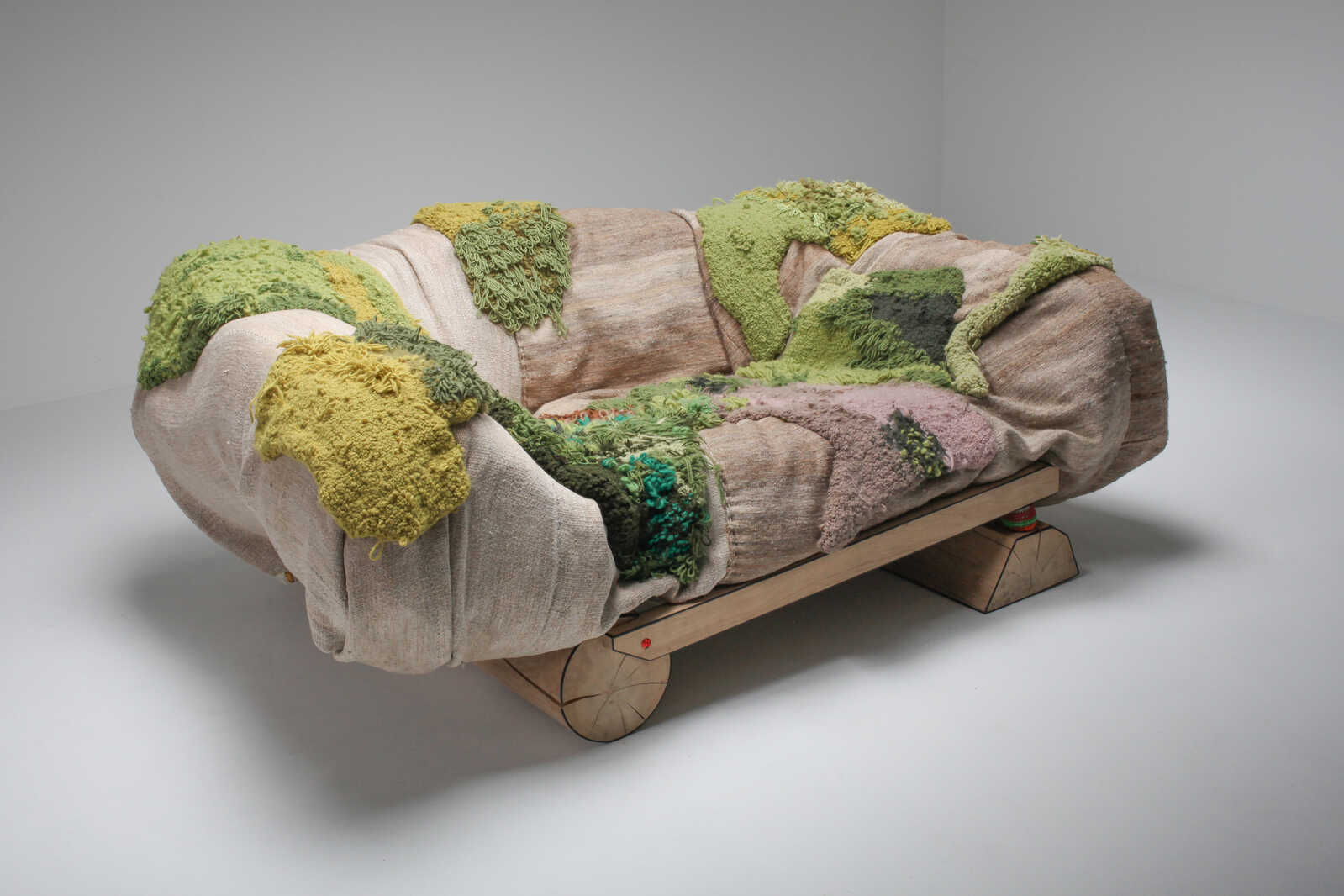 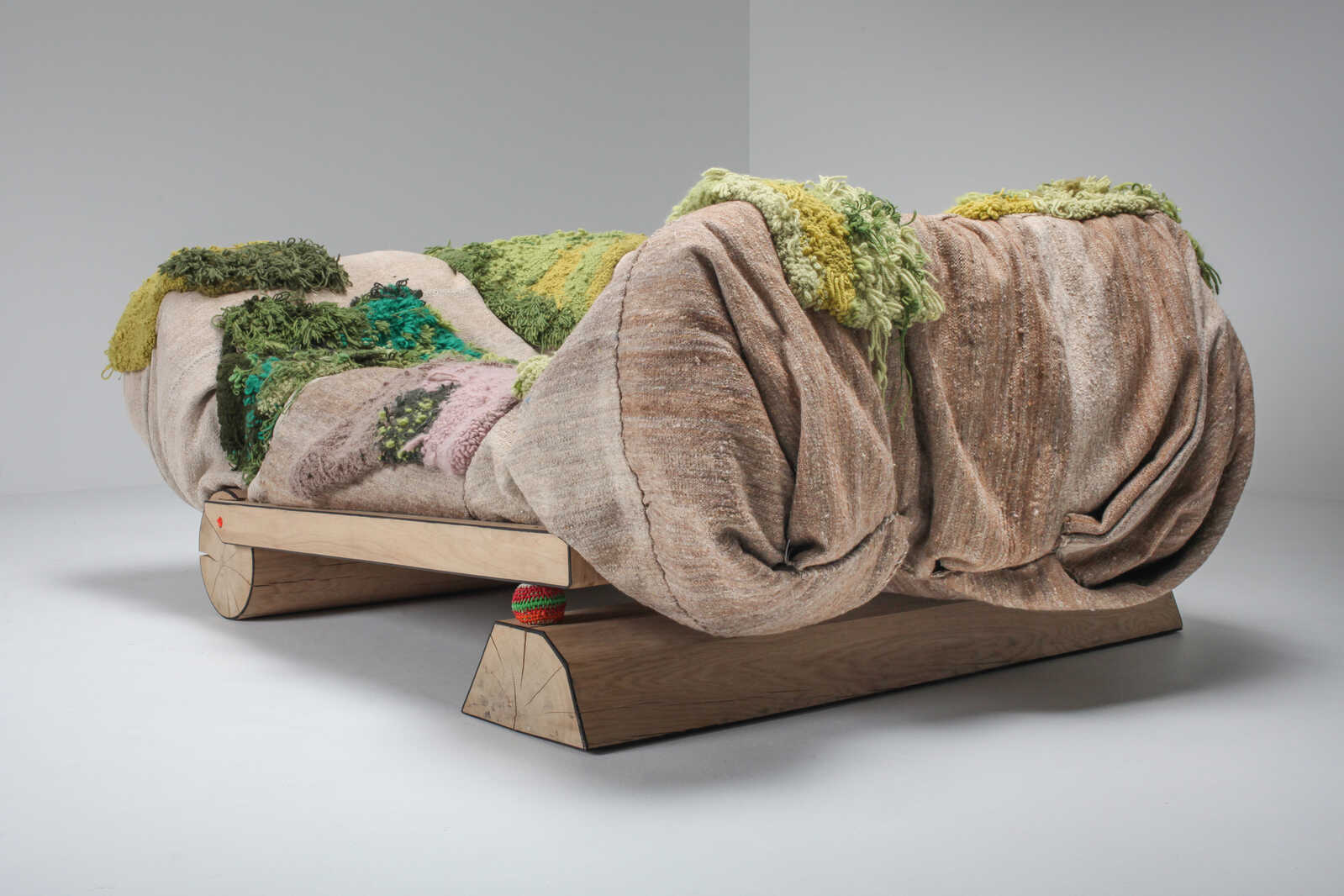 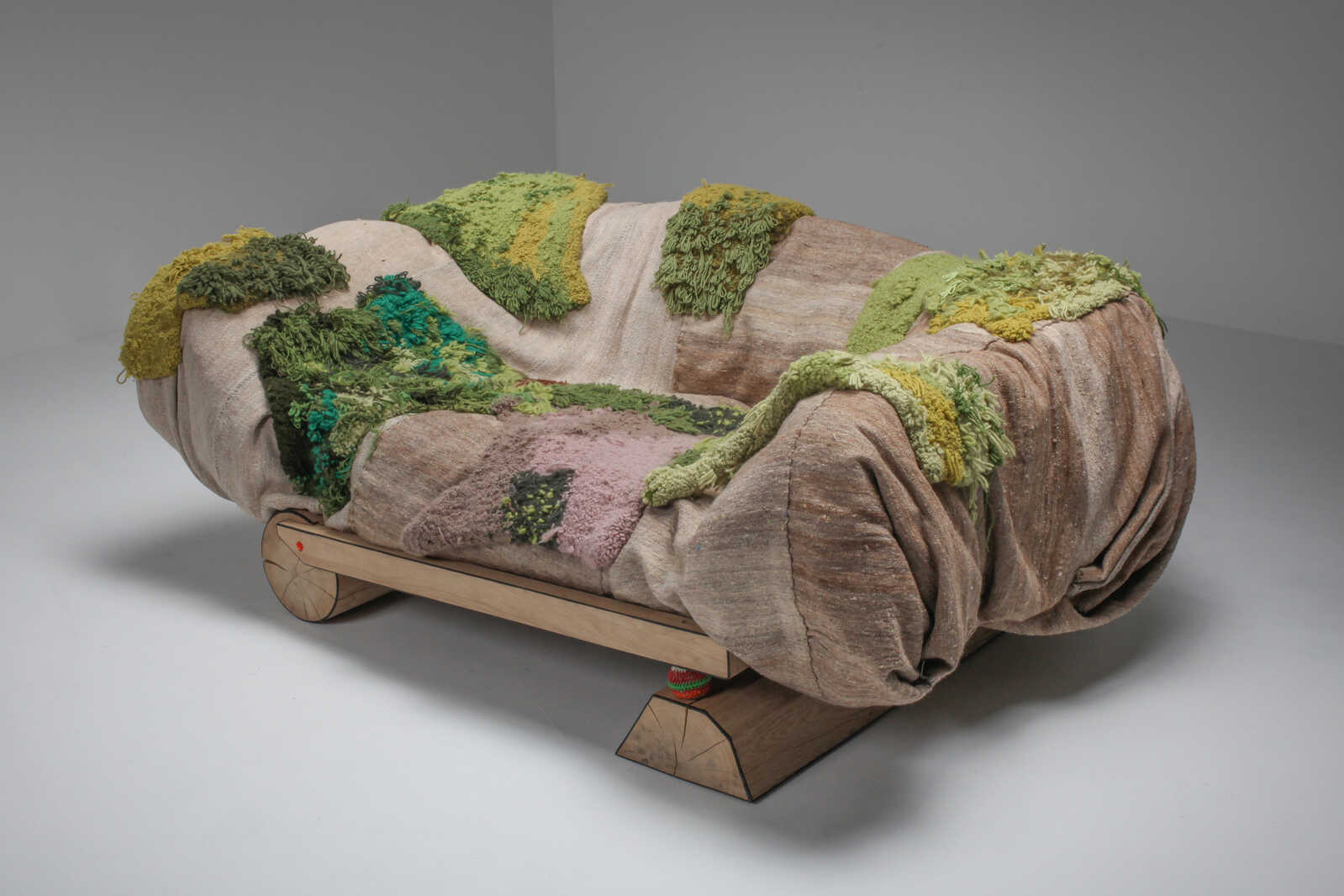 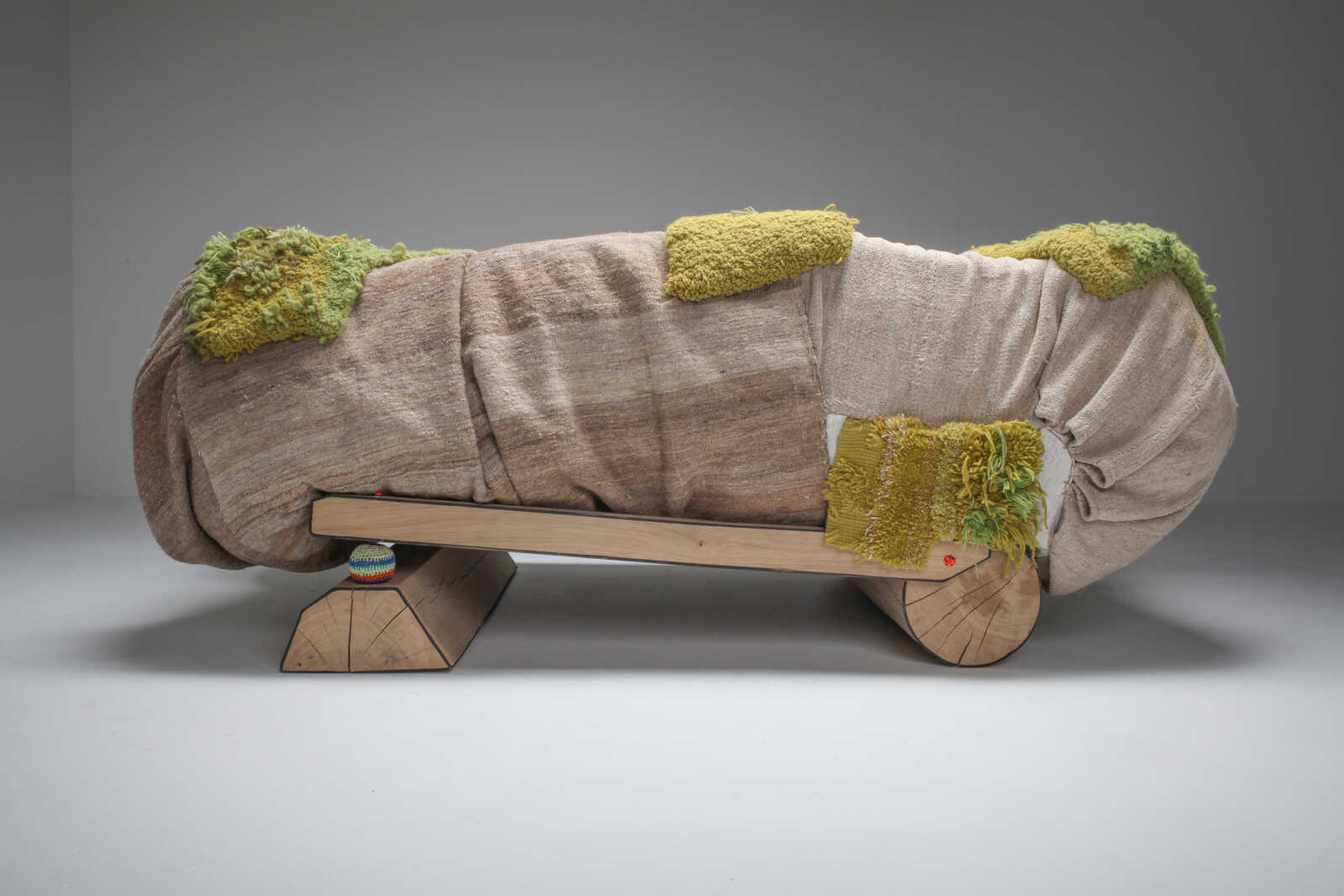 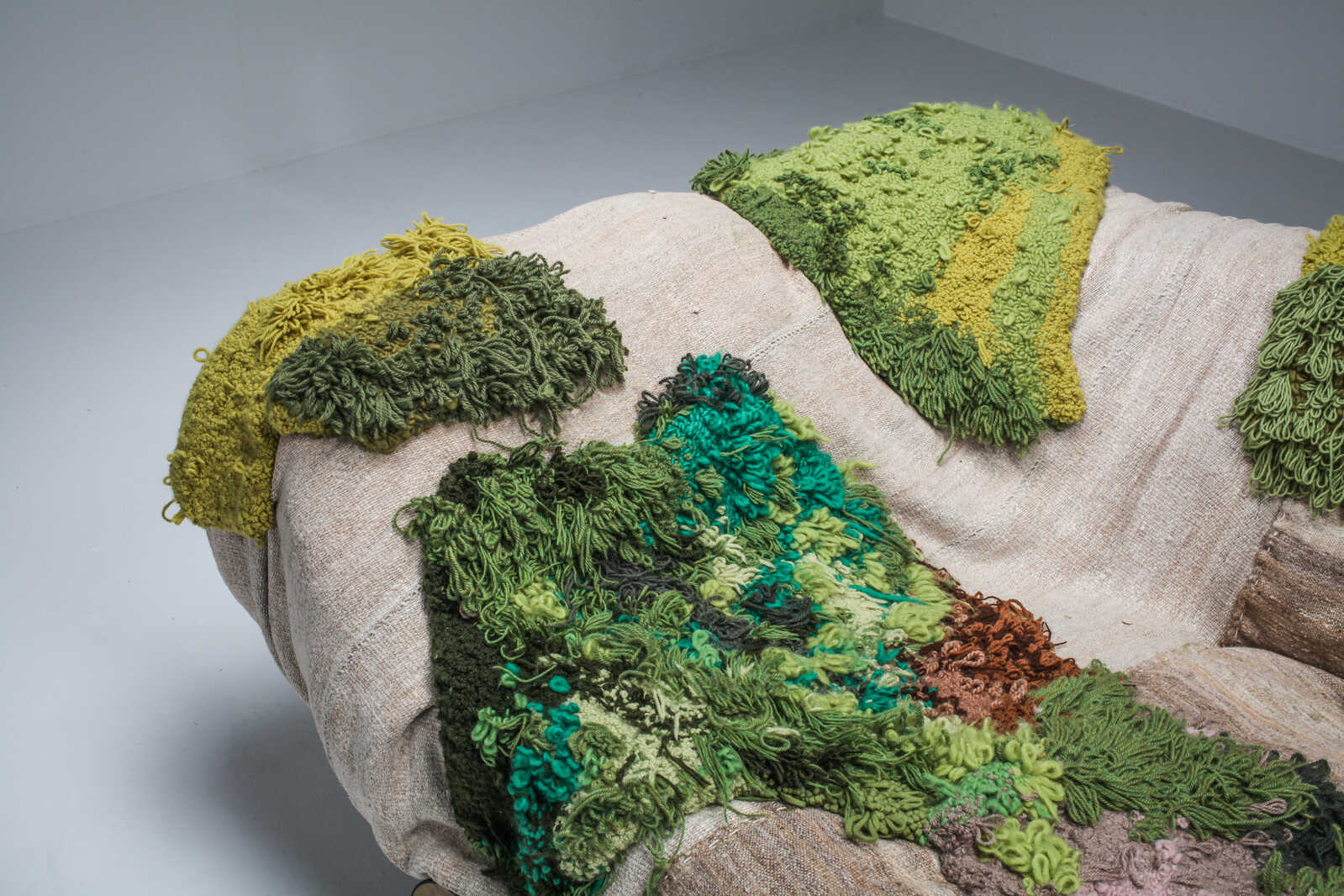 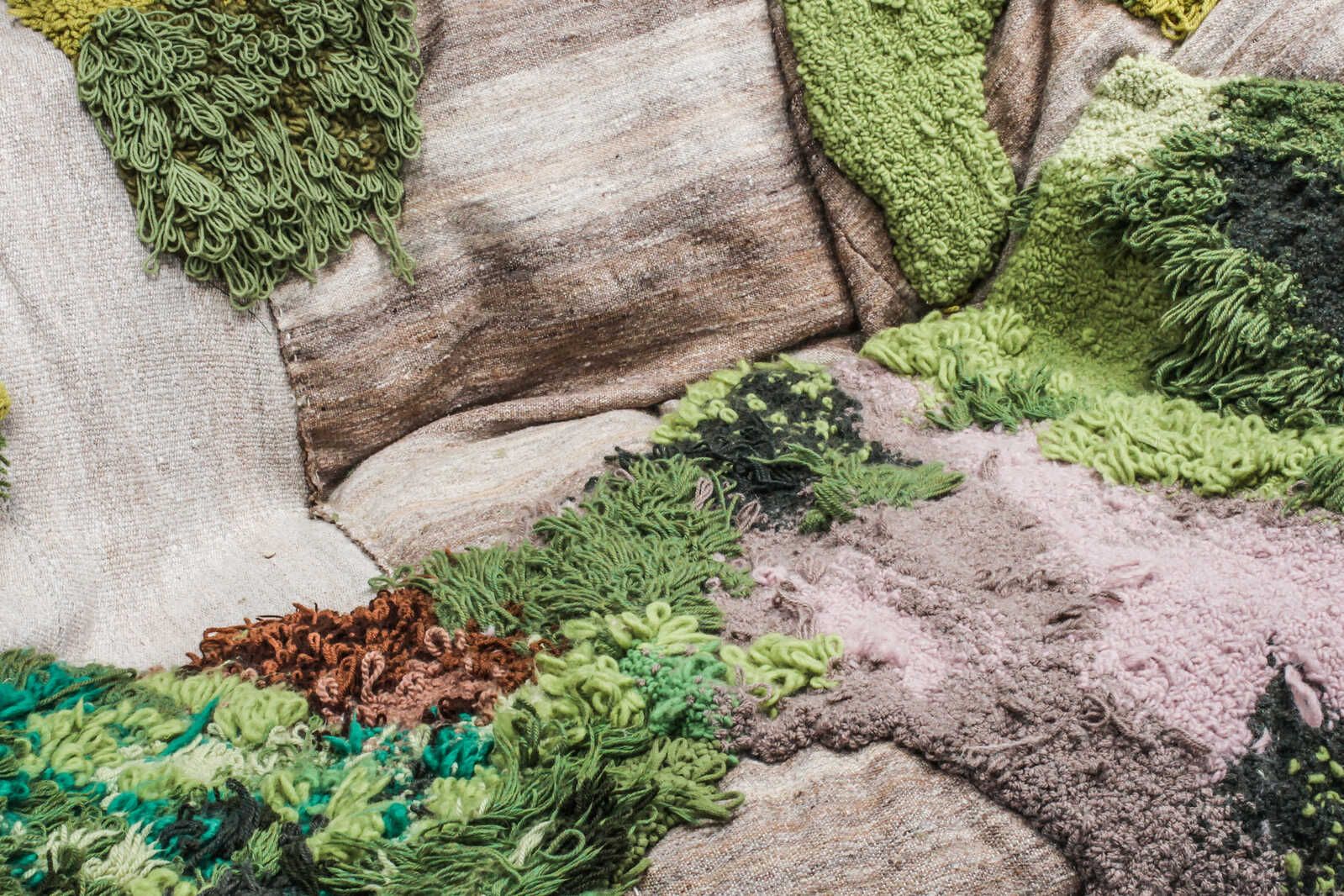 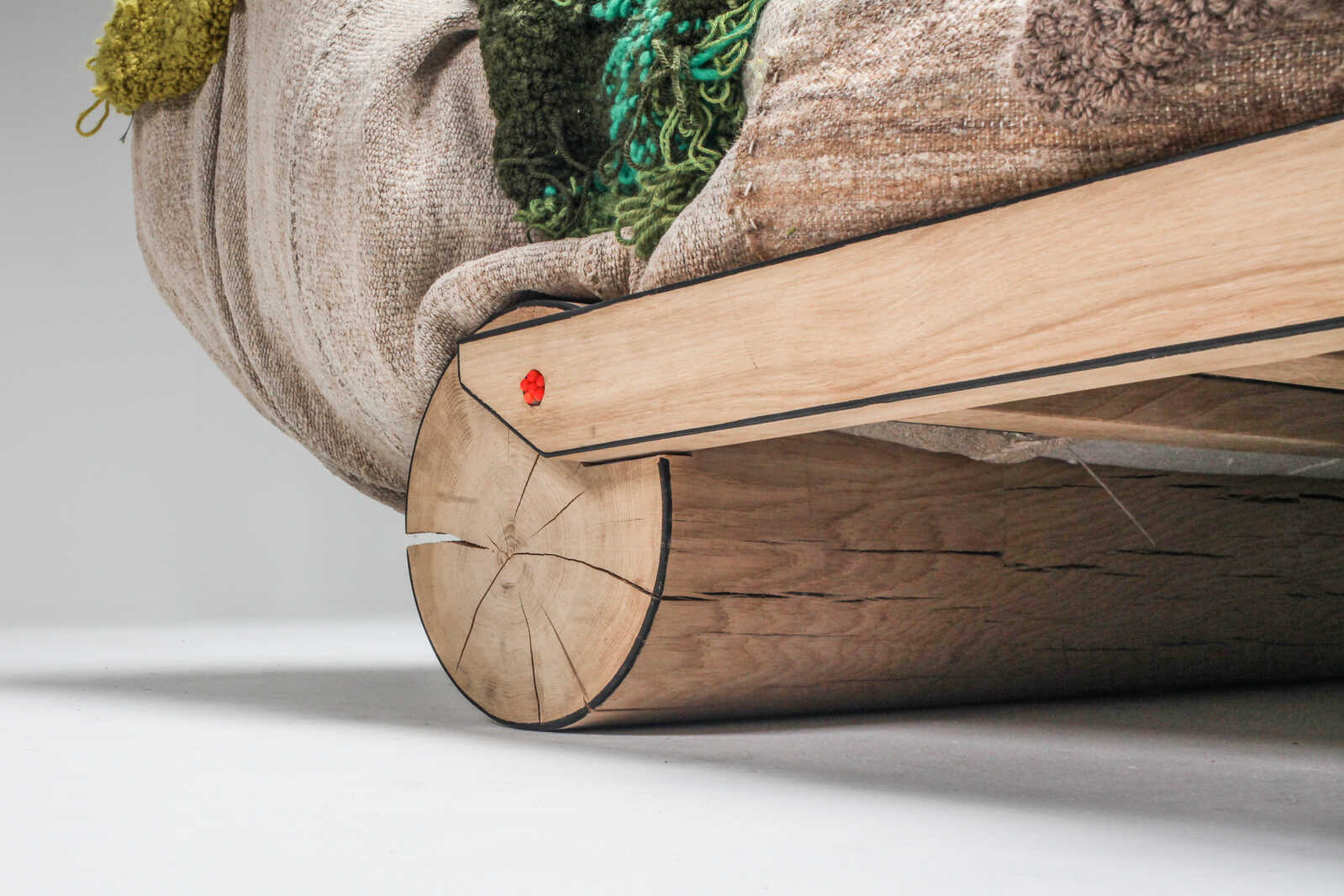 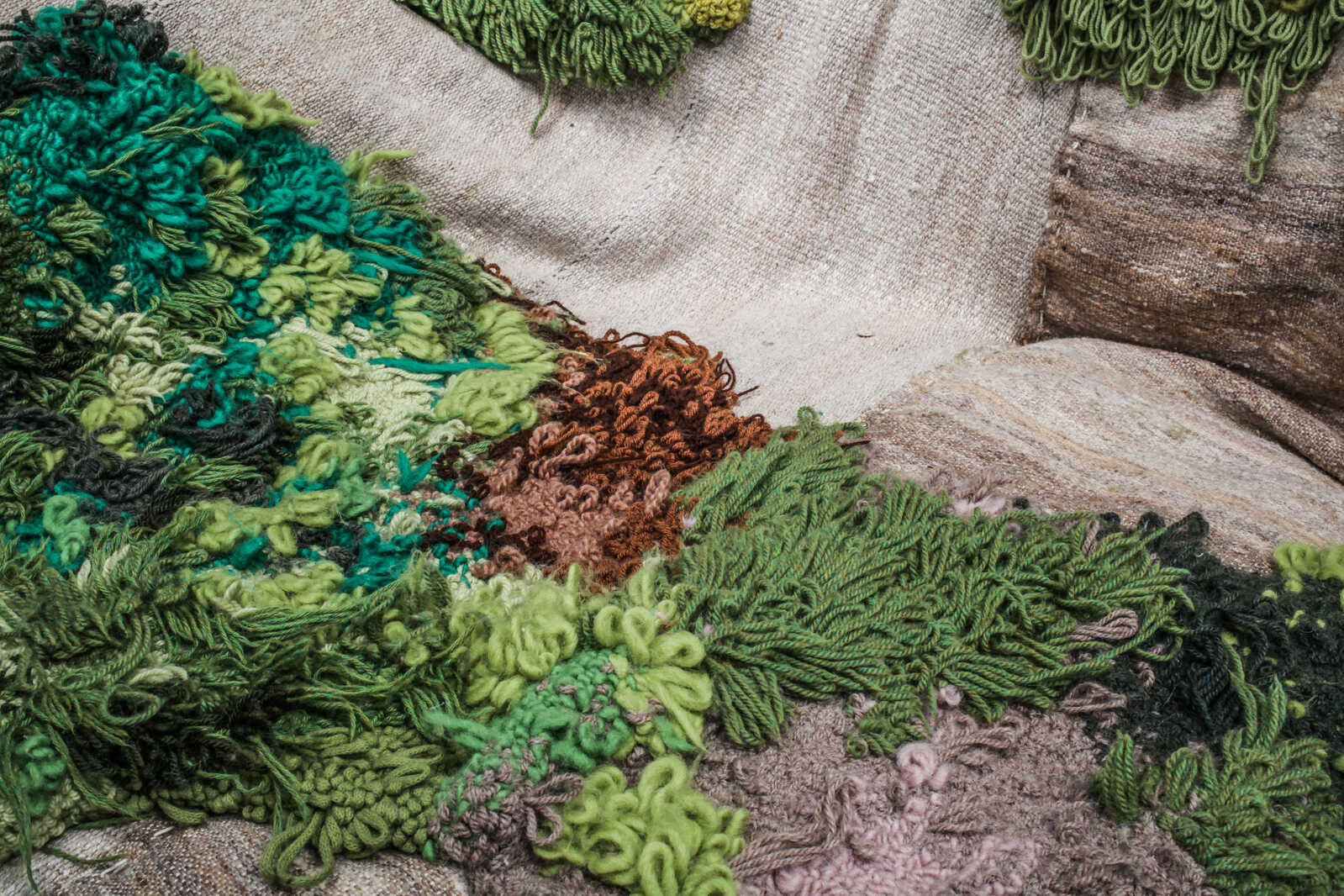 This functional art sofa echoes the trucks that transport the grain in Rajasthan, the canvas is a weaving of raw wool from the mountainous regions of Turkey, the tapestry was created in a collaboration with French artist Olivia Babel and features imagined maps or real-life conflict zones. The structure of the sofa is made from solid oak.

Born in Brussels in 1969, Lionel Jadot is an interior designer, artist, designer, filmmaker, adventurer. But all at once, preferably. Lionel Jadot is firing on all cylinders. ‘I never throw anything, I pick up everything. Not having a green thumb, I’m trying cuttings, weddings against nature. I never forget a line.’ He’s inviting us in subtle, off-beat worlds, on the edge of reality. Its material is made of dilated time. A wandering spirit, he seeks a protective balance in a hostile world. It is his constant questioning: what happens to the place where we live? For Lionel Jadot, everything is an object, everything is history. He draws from other places, other times, and seeks what’s linking them. He sews, stitches, unpicks, blends materials, combines eras. He will enshrine some wood essence in metal, some mineral in a plant, the old in the new. ‘I take extra care to the joint between two materials.’ With him, there is always some play in the parts, as in a piece of machinery. From a kingdom to another, he provokes organic, viral growths, generating energy. Linking past and future, he never forgets a line. ‘I accumulate them.’ He’s inviting us in subtle worlds, off-beat, on the edge of reality. Are we in 1930 or 2030? Both, no doubt. Its material is made of dilated time.

The eye goes hand in hand with the ear. ‘When I walk into a place, I listen to the good (or bad) it does to me. An ineffable feeling.’ He recreates mutant buildings, like the future Royal Botanique, a 5 stars hotel housed in the Church of the Gesu, a former convent behind a 1940 façade. He talks about a ‘hotel object’, which he holds and turns around in his hand.

A wandering spirit, he’s flirting with retro-futurism. The Jam, another hotel, is intended for urban travellers, fans of swiftness, fluidity, and hospitality. He designs interiors as a set of objects: a motorcycle cut in concrete becomes a bar counter. He finds gothic cartoon echoes, from the likes of Moebius, Alejandro Jodorowsky, Enki Bilal, sets from Garage Hermétique and Blade Runner, a
protective balance in a hostile world.

Discovering Jadot’s little cosmos of collected and accumulated goods, it becomes clear that every element has its own story. I tried to collect them and in turn, devour them in the coming paragraphs. But first: the show is best experienced seated, barring the distinction between the object of use and object of attention, they invite for different types of conversation. The seats, chairs, thrones all make us think of our own physical comportment, and of how the seat lends grandeur to the person sitting on it, by crowning its presence. The crackling floor, the felt walls, and the diffused light slows you down into an oddly absorbing environment, in which you are left puzzled.

In the eclectic collages of objects, bits and pieces collected all over the world come together in ways practical, and logical, though possibly only in the artist’s mind. All his finds eventually seem to fall into place. Starting with the mere conception of a chair, rather than with a set-out plan or sketch, the works are intuitively construed out of an archive that one can only imagine the dimensions of. Things forgotten by others, precious for him, were all once designed for their own purpose. Here they find their fit as a base, a closing system or a balancing element.

Stories assembled at goodwill, Lionel Jadot finds solutions while playfully paving its very own middle ground between art and object.